I get a lot of questions about the gear used by referees in the Barclays Premier League.  So after a bit (a lot, actually) of digging, I can tell you with a high degree of confidence about each piece of gear these top flight referees utilize.

I add the “high degree of confidence” qualifier because I wasn’t able to confirm each item with an official authority, like the PGMO for example.  But, between suppliers, deduction, and people-in-the-know, I believe I’ve sussed it out.

We’ll refer to the frame grab below of Mark Clattenburg, taken right before kick off of a BPL match.

The state-of-the-art communication system utilized by Premier League (and most other top flight leagues around the world) comes at a steep price.  The Vokkero Squadra is a two-way radio, but with full duplex communication capability.  This means that referees need only to speak; no push-to-talk buttons are necessary.  The fourth official, however, does use a PTT setup, ostensibly to not the disturb the rest of the crew as he deals with managers and substitutes.

The system boasts a range of 800m and is fully encrypted to prevent eavesdropping.

Alas, $3000 only gets you the stock headsets, and those certainly won’t do.  Phonak Communications makes the ComCom headset, which is available as a headset for commercial phone systems, or even your iPhone, if you don’t mind parting with $400.  You’ll also need to see an audiologist to get custom ear impressions done, which are then sent to Phonak for manufacture of your headset.  Add another $90 or so for that.  In the end, you get a high end communications ear piece guaranteed not to fall out of your ear when you run.

Premier League Assistant Referees use the Touchline Powerflags system for communication of offside and other important events between Assistant Referee and Referee.  The receiver features a curved body to better snug up on your upper arm, and can be set to vibrate only, beep only, or vibrate and beep.  The signal pattern is different for each AR, so the referee always knows who is paging him.  Conveniently, the receiver turns itself off after 2 hours of non-use.

There appears to be no standard for a referee’s primary timekeeping device; I’ve seen many different watches used by the top-flight referees.

Interestingly, the SPINTSO has never been spotted on the wrist of a Premier League referee. 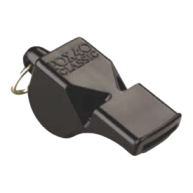 England’s best use only the Fox 40 Classic.  While Andre Marriner prefers the green version, the other Select Group referees choose black.

While I haven’t been able to confirm that the Fox 40 Classic is the “official” choice of the Premier League or PGMO, the fact that no variations are ever seen indicates that the Fox 40 is at the very least, the de facto standard.

While Select Group officials don’t all use the same model, they all use a wrist lanyard, leaving us to conclude that they are required by the PGMO.  Models spotted in use include Acme (pictured), Official Sports, and Fox 40.

Manufacturer:  Several
Price: $2-5
Want one?: Order from the same place you get your whistle 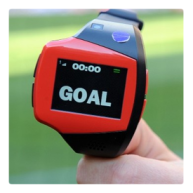 I’ve received more questions about the “red watches” than any other piece of referee gear.  The large watches outlined in red and worn on the sub-dominant wrist are part of the Goal Decision System used in the Premier League.  When the whole of the ball crosses the whole of the goal line, between the posts and under the crossbar, this watch vibrates and displays the word “GOAL” in large letters.  The goal line technology used in England – Hawkeye – is the same used in pro tennis.  A stadium installation purportedly costs GBP 500,000, which explains why we won’t be seeing it in MLS anytime soon.

Manufacturers:  Hawk-Eye Innovations (subsidiary of Sony Corp.) and Adeunis RF
Want one?: Pony up a cool half million and I bet they’ll throw one in

Or “kit”, if you prefer. Starting with 2013, Nike is the official provider of referee uniforms for the Premier League.  Uniforms are an area where USA referees are definitely envious of our UK-based brethren.  We’re  stuck with jerseys from Official Sports, whose designs harken back to the “zebra stripes” of our American football referees.

Another area where referees appear to have some discretion is with their choice of writing implements and disciplinary cards.  Mark Clattenburg and Michael Oliver use a pen, while Lee Mason and Howard Webb prefer a pencil.

As for cards, I’ve seen the usual suspects, including b+d’s offering, and the FIFA card set (pictured here in use by Phil Dowd).  Sadly absent: iTOOTR’s own custom made card set.  (A man can dream. . .)

Ready to break out the plastic and order your Premier League setup?  Or are you perfectly happy with your gear?  Leave a comment below.Coming Soon: How you can gear up like the Premier League referees – for a fraction of the cost.