There are only three makers of electronic flags whose products are widely available: RefsCall, Touchline, and Ervocom.  Which should you consider?  Are the Touchline and Ervocom models really worth 3x the price of the RefsCall flags?  We’ll answer these questions and more as we take an in depth look at Electronic Flags.

Let’s get this out of the way up front: electronic flags are expensive.  RefsCall flags can be had for around $230, while both the Touchline and Ervocom sell for about $725,  Electronic flags are a great tool, but they don’t come cheap.

All electronic flag systems are designed to do one task: allow the Assistant Referees to alert the Referee when they have information to provide.  In all three flag systems, this is done by radio communication.  The flag stick contains a button that, when pressed, transmits a signal to a receiving unit, which is worn on the bicep of the referee.  In similar fashion to a cell phone, all three products allow the receiving unit to be set to emit a tone, to vibrate, or to do both simultaneously.  Each flag stick provides confirming feedback to the AR when the transmission has been sent. All three products use standard 9V batteries in both the flag sticks and in the receiving unit.  Battery life for the flags sticks is many, many matches, while battery life for the receiving unit varies from 8 to 12 matches.

This is where the three products on offer differ the most from each other, beginning with material used.  The RefsCall flag stick handle is made from impact resistant, smooth plastic, while the Touchline and Ervocom stick handles offer a rubberized handle, that has texture, making it easier to grip, especially with wet hands.  The RefsCall flags can be slippery, especially in wet conditions, or when a gripped by a particularly sweaty assistant referee.

The Ervocom flag stick is longer than the Touchline; whether this is a good or bad thing is completely a matter of preference.  Referees that are under 6 ft in height tended to prefer the shorter Touchline flag stick, along with its’ smaller flag.  Taller referees didn’t appear to have a preference. 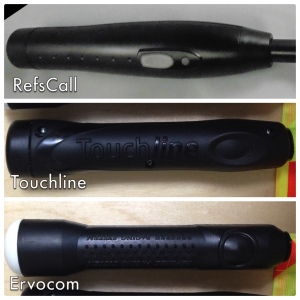 The grip on the Ervocom flag stick is textured and bumpy with raised “bumps” on the handle to promote grip.  The Touchline flags feature the Touchline logo embossed on the handle, which also enhances grip.  From my point of view, I can’t say I prefer one over the other. The assistant referee gets feedback from each of the flag systems to let them know they have completed a button press that has notified the referee.  In the case of the RefsCall, the LED on the stick lights and short beep is emitted.  It is so quiet that it really can’t be heard during the excitement of a match.  The LED is only useful when “pairing” or setting up the flags. The flags from Ervocom and Touchline vibrate slightly when the call button is pressed, so the AR knows very clearly that a message has been sent to the receiver.  Both flag sticks feature two buttons on the handle; each is located 180 degrees around the stick from the other.

All of the flag sticks use a standard 9V battery which will last for many matches before needing to be replaced.  Replacing the battery is as simple as unscrewing a cap at the bottom of the flag, fishing the battery out, replacing it, and reversing the process from there.

All three units have the option to vibrate only, beep only, or vibrate and beep.  Changing the settings on the Touchline and RefsCall is fairly straightforward, while the Ervocom unit requires a screwdriver (included) to open the unit and access a set of internal DIP switches.

The battery on each receiving unit can be expected to last anywhere from 6 to 10 matches.  It’s a good idea to always keep a spare.  While the Touchline and Ervocom systems will warn you when the battery is low, The RefsCall receiver will simply fail to start.  For those particularly obsessive referees, it might be a good idea to keep a 9V battery tester voltmeter so that the exact power level could be taken before each match.

Replacing the battery is straightforward in the case of the RefsCall and Touchline flags.  You simply remove an access door (RefsCall) or the receiver cover (Touchline) to access the battery.  The battery compartment on the RefsCall unit is very tight, and the battery and clip have to be oriented exactly as they were when you removed the battery.  Failure to do so will make it nearly impossible to get the compartment door back in place. The Ercovom battery can only be accessed by opening the receiving unit via the supplied screwdriver.  While this certainly isn’t as convenient as simply removing a cover or access door, it only has to be done every once in a while, so I wouldn’t let this deter you from a purchase.

All three systems allow the flag cloth to be removed so it can be washed or replaced.  Some even offer different styles of replacement flags, so you could switch from a diamond pattern to something else, if you preferred.  The Touchline system flags are the easiest to remove, as they are held in place by a simple locking cap at the top of the stick.

The RefsCall manual suggests lubricating the O-rings on the flag stick battery covers on occasion to keep them from drying out and cracking.

Apart from that, no maintenance needs to be done on any of the flags systems.

The RefsCall set ships with the two flags, receiving unit, a (useless) arm strap, and a carrying bag. 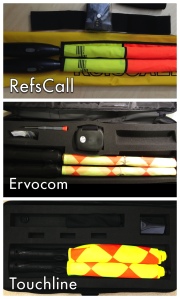 There is a big price difference between the RefsCall set and the other two, and with good reason.  The Ervocom and Touchline sets are much more thoughtfully and ergonomically designed, offer a protective carry case, and have the ability to have each flag transmit a different signal to the referee (e.g. beep once for AR1, beep 2x for AR2).

Still, if you would like to dip you toes in the waters of electronic flags, you’ll be okay with a RefsCall set, assuming you go and get a proper armband to replace the one packed with the unit. If you’re very serious about refereeing and/or don’t mind spending 3x the cost of the RefsCall, you’ll want to choose between the Ervocom and the Touchline flags.

Choosing comes down largely to a matter of preference.  Do you prefer a shorter flag stick (and correspondingly smaller flag), or would you like the longer shaft and flag of the Ervocom set?  You’ll have to decide that.  If you are able, try to borrow a set from a referee that has one so you can check it out.

My 1st choice is the Touchline Powerflags, but I don’t think you could go wrong with the Ervocom flags.  If you can’t bring yourself to part with $725 for flags, the RefsCall set is perfectly serviceable at 1/3 the price.

Where to Buy (USA)

RefsCall flags are available at Official Sports and Referee Store.com